When it comes to fly fishing in Michigan, many anglers are drawn to Lake Michigan tributaries along the western side of the Lower Peninsula.

The most popular Lower Peninsula rivers for migratory salmonids—from south to north—are the Dowagiac, St. Joseph, Muskegon, Pere Marquette, and Manistee. The best way to fish for steelhead and salmon in these rivers is by boat which allows you to reach runs and pools that cannot be accessed by wading or private property.

The Upper Peninsula of Michigan—also known as the U. P.—is the northern and more elevated of the two major landmasses that make up the state of Michigan; it is separated from the Lower Peninsula by the Straits of Mackinac. It is bounded primarily by Lake Superior to the north, separated from the Canadian province of Ontario at the east end by the St. Mary’s River, and flanked by Lake Huron and Lake Michigan along much of its south. Although the peninsula extends as a geographic feature into the state of Wisconsin, the state boundary follows the Montreal and Menominee rivers and a line connecting them. The Upper Peninsula contains 29% of the land area of Michigan, but only 3% of its total population.

Michigan’s Upper Peninsula has about 4,300 inland lakes and 12,000 miles of streams. These waters are populated with brook trout, brown trout, rainbow trout, steelhead, lake-run browns, smallmouth bass, pike, and musky. The St. Mary’s, Carp and Manistique Rivers are the U.P. most popular rivers for salmon and steelhead. In short, the Upper Peninsula of Michigan has more than its fair share of amazing fishing, interesting wildlife, and beautiful scenery.

Michigan’s trout fishery is very diverse with native brook trout plus browns and rainbows. Fly fishing options include dry fly fishing, nymphing and streamer fishing on one of the many streams, rivers and lakes that populate the region.

Migratory salmonids include steelhead, Chinook and coho salmon and lake-run brown trout that can run 8-12 pounds. Skamania is a species of summer-migrating steelhead the Michigan DNR stocks in southern Lake Michigan and which can be found in the Dowagiac, and Pere Marquette Rivers.

Unique to the U. P. are coaster brook trout—a migratory fresh water form of brook trout that spends part of its life in the nearshore waters of the upper Great Lakes. Once abundant and widespread, they are a big, colorful, highly sought after sport fish willing to hit flies and artificial baits. Historically, most of Lake Superior’s 3,000 miles of shoreline and tributary streams supported fishable coaster brook trout populations.

Atlantic salmon—one of the most prized game fish in the world—are known for their leaping and fighting ability. Although they were once native to Lake Ontario, they were extirpated from the Great Lakes before 1900. They were successfully reintroduced to the St. Mary’s River in the U.P., situated in Sault Ste. Marie, Michigan and the sole outlet of Lake Superior. This river system travels eastward roughly 70 miles to Lake Huron.

Traveling to and around Michigan is pretty easy thanks to its highway system and commercial airports. Michigan airports are supported by major U.S. airlines and include Detroit (DTW), Grand Rapids (GRR), Lansing (LAN), Marquette (MQT), and Traverse City (TVC). Car rentals from major providers are readily available.

Michigan’s weather features the four seasons common to the Midwest with summers shorter and winters longer and colder in the Upper Peninsula versus the Lower Peninsula. The Dowagiac, Manistee, Muskegon, and Pere Marquette Rivers do not ice over and are fishable during the winter months for resident brown trout and steelhead.

When it comes to Michigan fly fishing, many anglers are drawn to Lake Michigan tributaries along the western side of the Lower Peninsula for its bigger game fish—migratory steelhead, brown trout and Chinook salmon. These rivers also host resident populations of brown trout as well as smallmouth bass in their warmer sections.

The Dowagiac River is a St. Joseph River tributary and only 90 miles from Chicago. Over the last year, the Dowagiac River and its watershed have undergone a transformation with the 2021 removal of the Pucker Street Dam in Niles, Michigan.

Removal of the 90-year-old hydroelectric dam—which hadn’t been used for more than 20 years—is letting the Dowagiac River flow freely once again. That in turn should help restore fish habitats that were lost when the dam blocked upstream the migrations of steelhead since the 1980s. The dam removal will also tie into efforts upstream to restore the river’s natural meandering course and associated flood plains. The first of two meander bends should be completed this year with additional bends to follow. In southern Michigan, there is no comparable coldwater river system with a high gradient and with the potential for a high-quality coldwater fishery. (See “Restoring the Dowagiac“).

“The ‘new’ Dowagiac is a sight to behold, and resident brown trout are just beginning to colonize this new stretch of water. It’s very reminiscent of Montana or Idaho,” said Jay Anglin who has been fishing the Dowagiac and St. Joseph Rivers for over two decades as a fly fishing guide and knows the Dowagiac intimately as a coldwater fishery.

“We have steelhead in the Dowagiac River literally 12 months of the year thanks to various strains including Skamania which migrate up the St. Joe from Lake Michigan at different times of the year,” said Jay Anglin. “The Dowagiac supports plenty of natural reproduction from the various species of salmonids and we see wild adults return regularly. My hope is that the Dowagiac eventually develops its own run of wild steelhead instead of various strains that happen to find their way here to naturally reproduce.”

“Many people don’t realize the Dowagiac is already a good trout river with resident brown trout exceeding 20 inches not unusual thanks to a longer growing season and plenty of high-protein food sources available from steelhead and salmon eggs, fry and parr,” adds Anglin.

During the months of October, November, and December, the Muskegon is transformed into one of the Midwest’s premier spey fishing rivers. Lake-run brown trout are an often overlooked game fish that are most abundant from late September through March. Chinook or king salmon enter the Muskegon in August and September, but are not fished heavily until they concentrate in October. According to guide Jay Allen, the 2022 reduced spring steelhead bag limit of one fish on the Muskegon had an immediate impact on the fishery.

Steelhead who enter the river in the Fall remain in the river through the winter months, with new fish arriving any time there is rainfall or a major snow event.

There is a very strong population of resident brown and rainbow trout.  Both types of trout can be found in the twenty miles of river below Croton Dam. 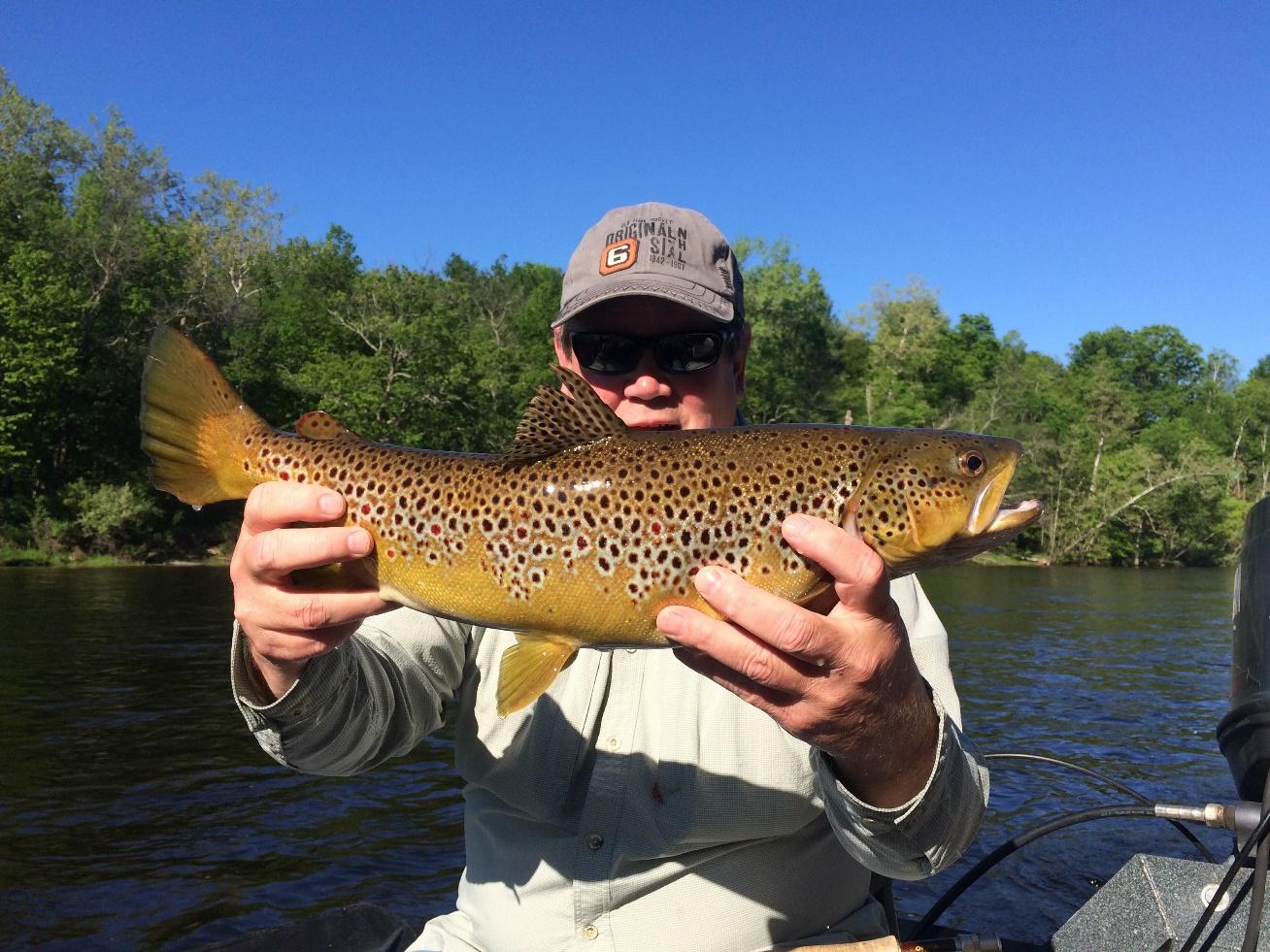 The most exciting hatch of the year, the gray drake, occurs in late May and extends into the first week or two in June. (Photo by Jay Allen)

The most popular warm water fish are smallmouth bass and northern pike. The Muskegon River is a fantastic smallmouth river from late June until late September and floating the river in the summer is a fun and relaxing trip. Northern pike inhabit the entire system and are fished during the months of May through September.

The Pere Marquette River is one of the finest trout, steelhead, and salmon fisheries in the Great Lakes region. It is a tributary of Lake Michigan located on its east shore. The regular trout season on this river is superb for resident browns. Acrobatic steelhead enter the river from Lake Michigan in early fall and provide excellent fly fishing throughout the winter until early spring. Chinook salmon enter the river in late summer and provide good angling through mid-fall. Quality hatches of mayflies, caddis, and stoneflies exist which provide tremendous dry fly angling for the river’s resident brown trout.

My introduction to fly fishing occurred on the Pere Marquette (PM) River one Fall over 35 years ago in pursuit of the annual king salmon run from Lake Michigan. The area we fished was the “Flies Only” eight-mile stretch of the upper PM which features plenty of prime spawning gravel ideal for both salmon and steelhead redds. David Ruimveld, a noted Michigan outdoors and fly fishing artist, captured the beauty of a PM steelhead and the “Flies Only” section in his painting depicted above. Migratory salmon and steelhead traverse 65 miles of river to reach this spawning ground.

After my introduction to Fall salmon fishing on the PM, I was back for the spring steelhead run in March and April, then opening day of trout season in May, followed by the two-week Hexagenia Limbata mayfly hatch in late June for night-time fishing—which is a unique experience if you’ve never tried it. The “hex” mayfly inhabits the more silty, lower section of the PM and is the largest mayfly in the U.S. Fall fishing features migrating king salmon in September and October and steelhead who follow the salmon run and then stay in the river all winter.

Traversing thru the Pere Marquette State Forest and the Manistee National Forest, the Manistee River runs 190 miles through the northwestern Lower Peninsula of Michigan and is considered, like the nearby Au Sable River, one of the best trout fisheries east of the Rockies.

Once teaming with native grayling, it now is home to native brook trout and introduced rainbow and brown trout. The Manistee has two dams—Hodenpyl and Tippy. Both dams produce electricity and were part of early settlement of the region. The tailwaters below Tippy Dam hosts one of the world’s best migratory fisheries for steelhead and Chinook salmon. Locals refer to this river as “The Big Manistee”. The Manistee is designated a National Scenic River.

The Au Sable River—known for the birthplace of Trout Unlimited—runs approximately 140 miles through the northern Lower Peninsula, through the towns of Grayling and Mio, and enters Lake Huron at Oscoda. It is considered one of the best brown trout fisheries east of the Rocky Mountains.

The Au Sable River is best known for its three sections:  The “Holy Water” main stream which is strictly a catch-and-release and flies-only stretch; the South Branch and the North Branch.  It is easy to wade and fish, and is easily accessed at multiple public sites.

In fact, recent radiotelemetry monitoring of spring and summer brown trout movements confirmed large brown trout used a few specific locations near cover (referred to as home sites) as resting locations during the day, then moved across various distances at night, and generally returned to the same home site the next morning.

Below are fly shops, guides, lodging and dining establishments that support anglers near the river systems that we’ve discussed above.

Michigan is nationally known as a fly fishing mecca for trout, with tens of thousands of miles of cold, quality trout waters, of which many have wild, sustaining trout populations. With the addition of Great Lakes tributaries, the state offers the lure of big game fish like Chinook salmon, Atlantic salmon, steelhead and lake-run brown trout. Most Michigan waters offer both public wading access as well guide services who allow fly fishing from drift boats and rafts.

Retired corporate marketing executive Jim Schmiedeskamp is a member of Chicago’s Oak Brook Trout Unlimited chapter where he was the Communications and Publicity Chair for 2014-2020. He writes about coldwater conservation initiatives and fly-fishing adventures.